As a part of our “Initiate the Future”, we try to inculcate the young generation into the world of digital Art. Moon, our COO and a prolific artist has been invited to Doon University to conduct the Wacom India workshop.

Always so thrilling to put out these announcements. Be sure to contact the maestro if you are in Dehradun.

Our beloved COO Moon Arun had a wonderful time at Artography Studio. He was invited by Wacom India to conduct a workshop on “Pen Tablets and Design”. A presentation on digital concept art and today’s art industry.

As a part of our “Initiate the Future” campaign, we regularly hold workshops to guide and induct the newer generation into the art world. 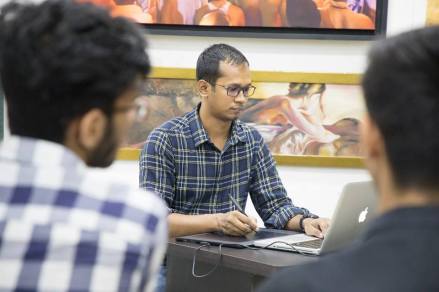 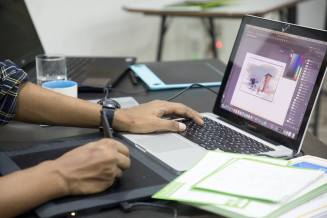 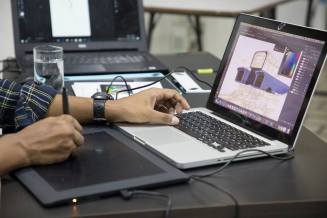 Visit us also on

Visit us also on

When we visited Daulat Ram College (University of Delhi), our aim was involve the literature student into the process of visualization. To engage them into the journey of visual imagining. We presented them the MARSHMALLOW CHALLENGE.

The project was to create the highest stable structure using 20 spaghetti sticks, thread, tape and a single marshmallow. Within stipulated time, the teams under the flags of “3 Pipers“, “Analytics“, “Marshmallow Whatevers“, “Fantastic 4” and “SMS” built their own towers.

After Q&A related to the task, we ask them to write the story of their Marshmallow Challenge. Translation is the act of generating meaning. It is a process of transmutation. We ask them then to depict their story into a string of images. We encourage them to draw their narrative into a storyboard.

We selected the best story and storyboard, we reworked it and created a whiteboard animation to showcase their visual understanding.

We asked the supercalifragilisticexpialidocious participants of the VISUAL STORYTELLING WORKSHOP to create an image of themselves in words. Being able littérateurs, they framed themselves in poetic phrases. And after a discussion on adaptation and translation, the magnificent Manas Mathur (sculptor par excellence) guided them to mold words into clay.

This is a showcase of the spectacle that followed. We are humbled to enable you in your visual journey. 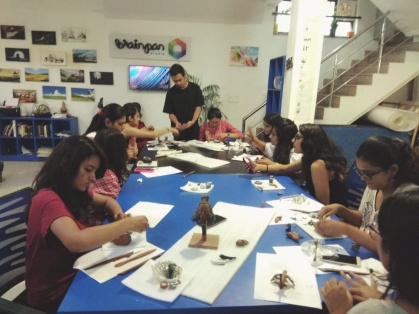 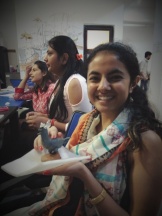 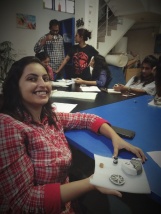 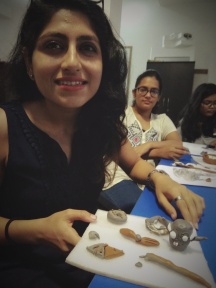 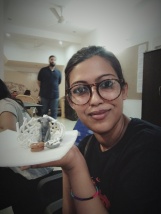 After a brief introduction by Samana Madhuri (the lecturer in charge), Sumanto began the session with the story of the three cave mothers. Our CEO Aditya Singh took over from there to enumerate the four principles of visual storytelling.

AC introduces Major General Fudgecake (his alter ego) after talking briefly on the importance of collaborations in arts. Major then takes over the workshop in order to achieve his mandate to find the greatest Marshmallow Tower maker. The day proceeded with lot of fun and friendly banter. The teachers were the most mischievous of the lot.

Some of the towers were success and reached the stars, some were leaning towards greatness before the fall, some never took off the ground and some were whatevers.

After analyzing the challenges, vision, time management, individual roles and exercise takeaways, the students wrote and presented their marshmallow story.

Moon’s masterclass in emotion depiction and character design was a spectacular success and enabled the groups to make their own storyboard for their marshmallow stories. The day 1 ended with our promise to create an animated video of their best story. We will meet again on Tuesday at our studio for the second day of the workshop. 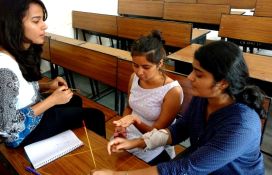 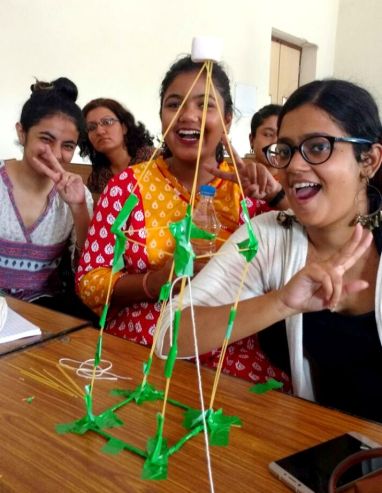 We create and we impart. We discuss and we implore. As a part of our “Initiate the Future” programme, we are conducting a visual storytelling workshop for the students of Daulat Ram College (University of Delhi). 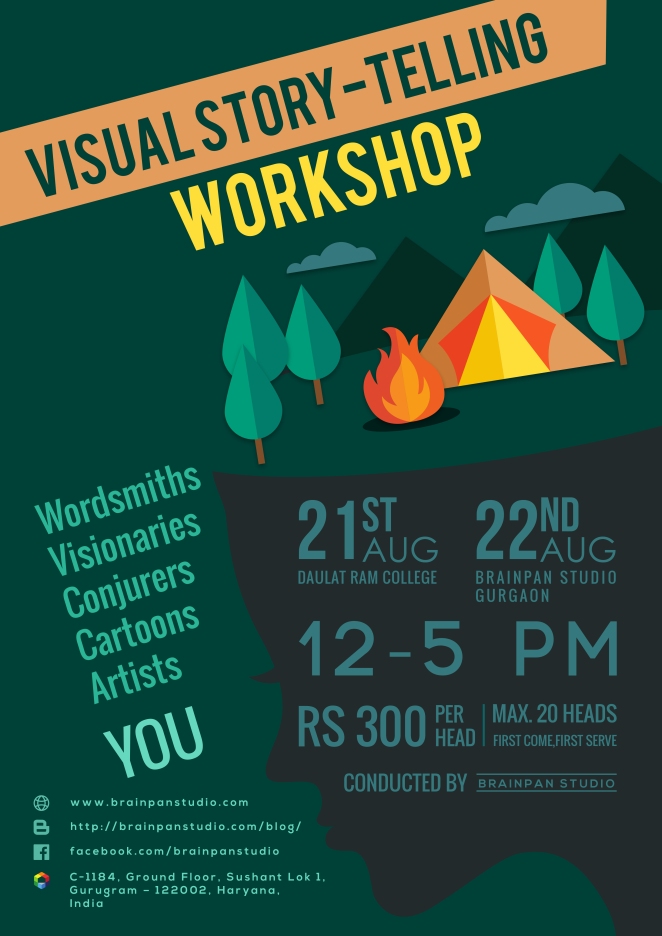 Workshop with Wacom on character design at Jamia Millia Islamia by Moon Arun. Stepping ahead in guiding fine art students into multimedia industry.

Under the guidance of the incredible Manas Mathur, we hosted a Clay Modeling and Mould Making workshop for our studio family and friends. It was the day when we turned ONE. Thank you for participating in this awesome exercise of creativity and learning. Thank you for the comradeship, the laughter and the cheer. Thank you for the memory. 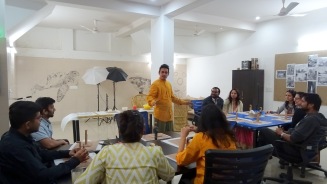 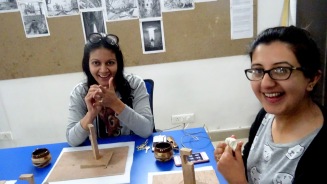 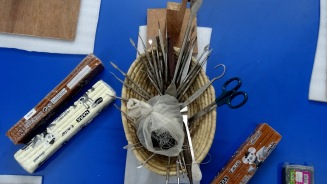 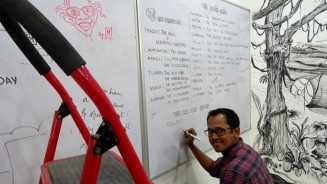 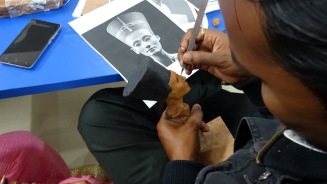 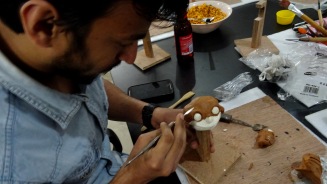 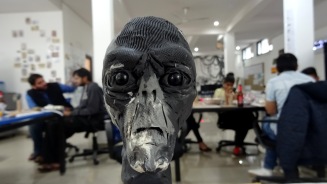 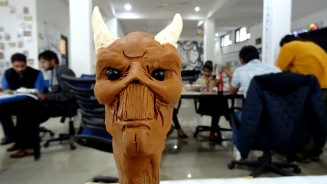 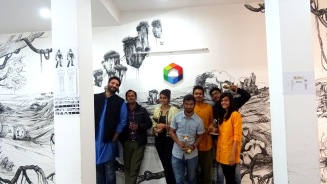 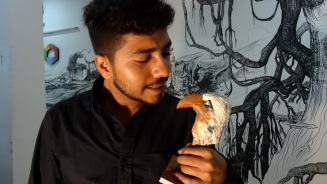 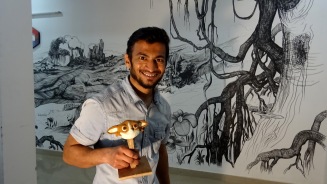 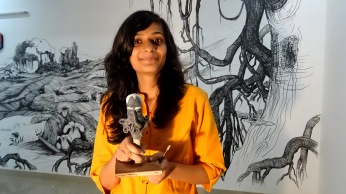